If you didn’t know, I’m going to Ambergris Caye and I’m hoping some friends come along. It’s really just a vacation, but we’re gonna try to get together to play some music and maybe even write a song or two. Everyone is invited. This is going to be very informal and we will mostly just play it all by ear. (pun intended)

Dates are July 28th – August 4th and I’m staying at Oceans Tide Beach Resort. But, that’s just when and where I’ll be there, when you come along is up to you. I just saw a flight on Delta on those dates for $311 round trip which gets you from Houston to Belize. Check Google Flights. From there you need to get to Ambergris Caye. Cheapest way to get from the airport to San Pedro, is taxi to Belize city ferry terminal and take the ferry. Taxi between the airport and the ferry terminal is about US$13 (two people) and Ferry is US$35 round trip. (~$100 for two people round trip) 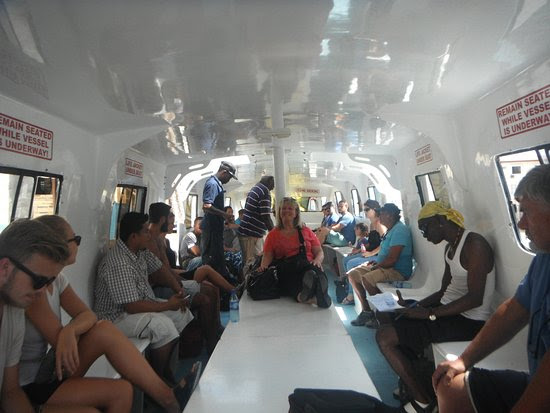 Faster is to fly on Maya Air or Tropic Air for about $140 round trip. No need to reserve either of these ahead of time, but I read on Maya Air website that they would automatically re-book you on standby for the next flight, if your international flight was late. Of course you could go one way and return another. I’m taking the ferry, it takes a while (about 90 minutes plus the 20 minute cab ride ) and isn’t the most comfortable, but its an experience.
You can’t rent a car on the island, but you can rent Golf Carts. They are not required, but they are fun. Could always split a golf cart.

Oceans Tide Beach is a little over US$100/night, its right on the water, has a small pool , deck and bar. I think there are only 11 rooms. Cheaper and more expensive places are nearby. So, whatever floats your boat. 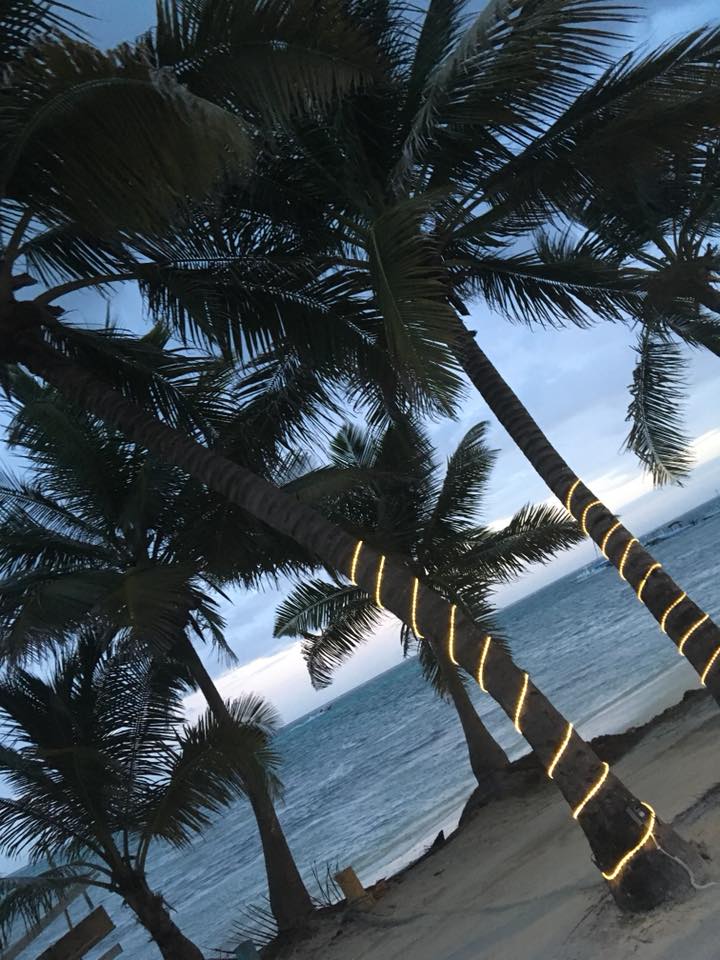 Currency exchange is fixed at US$1 = BZ$2, so that BZ$5 Belikin beer is really $2.50. A lot of places will take either. The ATM will give you BZ of course.
Most places you can get a Belikin beer or local rum drink for BZ$5. I took my fake yeti a lot of places they’d pour my drink in there. Fancy drinks and imported alcohol are quite a bit more. If you want a bottle of American liquor, get it at the Duty free in the Belize airport before you leave. I bought 3 liters or maybe it was 750ml bottles, but I didn’t even drink one because we were always going out, however Brent likes fireball, so I’ll prolly get a bottle or two of that.
Ocean’s Tide Beach Resort and a lot of the bars have internet, but it’s pretty slow. I was able to make Skype calls on it and I used AT&T international plan for maps and trip adviser but its US$10 per day for data. I have an unlocked phone now so this time around, I plan to get a Belize sim card when I get there. I’ll buy some pre-paid data and text or minutes. Looks like I can get 1Gig of data for a week for about $BZ10 Belize Sim Cards

D​on’t feel like you have to do everything with us, if there’s anything y’all want to do that’s not on our agenda. If y’all want to wander around with us or setup some kind of excursion , that’s cool too.

I found the island to be a muse for my songwriting. So, at some point, I’d like to sit down an see if we are inspired to write something together. I think there will be a lot of opportunity to just sit around and chat or play some music on the deck or the pier. I’m pretty sure there are a few regular jam sessions at a few of the bars, if you just want to play cover songs with a group. Brent Butcher has said we can play some songs during  his gigs that week. Also, there may be some open mic stuff at some of the bars, but I haven’t found any online.

I have a friend who will let a few of us play some songs during his regular gigs that week.​ If more people decide to come along, I can try to set up something bigger for just us, but at this point I think that will do.​ 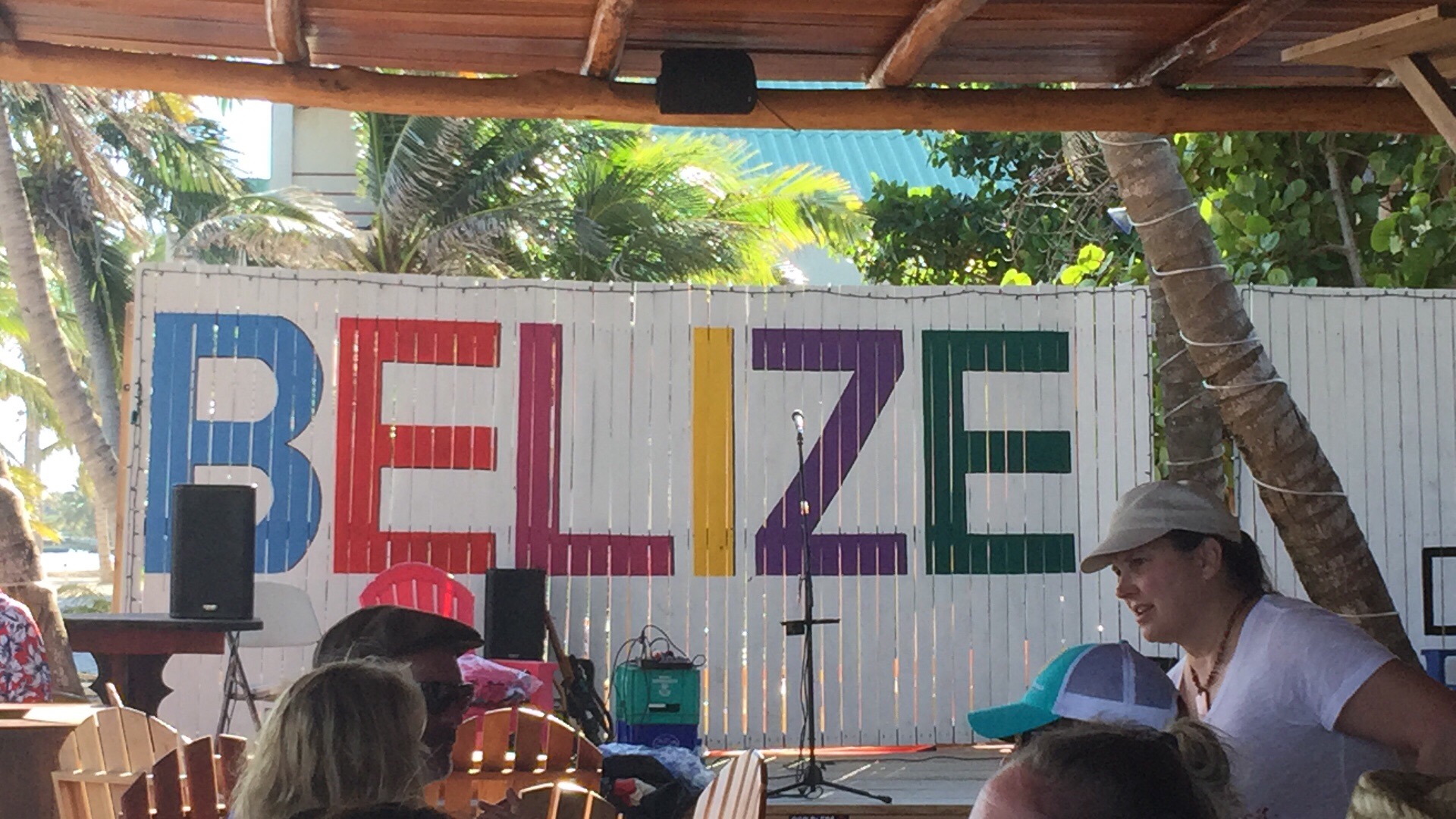 Amy’s birthday is August 4th, the day we fly back. I want to try to do something special for her. I’m not sure what, but if y’all would like to help celebrate it that would be cool. Maybe I can find someplace to get a cake and have it at dinner the night before, or have one hell of a brunch that morning, I think our flight is at 4:45pm so we have a little time.

Things I’m thinking about doing on the island

TBD: Play some songs at a friend’s shows or open mic nights
Monday: Crazy Canuck’s has some “Guitar Jam Circle” listed in Feb on their Facebook, not sure if that’s a appropriate for what we do or not. It looks more like some guy leading a bunch of learning guitar players.
Tuesday: Hermit Crab races at Crazy Canuck’s 6:30pm
Thursday: Chicken Drop (Chicken shit bingo) at Wahoo’s Lounge

Last time we took the all day sail and snorkel trip ​with​ these guys: ​​Caribbean Adventures Belize​.​ We might do something different like the trip to the mainland and the ruins this ​go round​ (though the time by boat and cost by air for traveling back to the mainland is a bit much)​. I highly recommend the snorkeling​, I may just do it again​.​ I don’t think we have the budget to do both.​ They also do fishing trips.​ 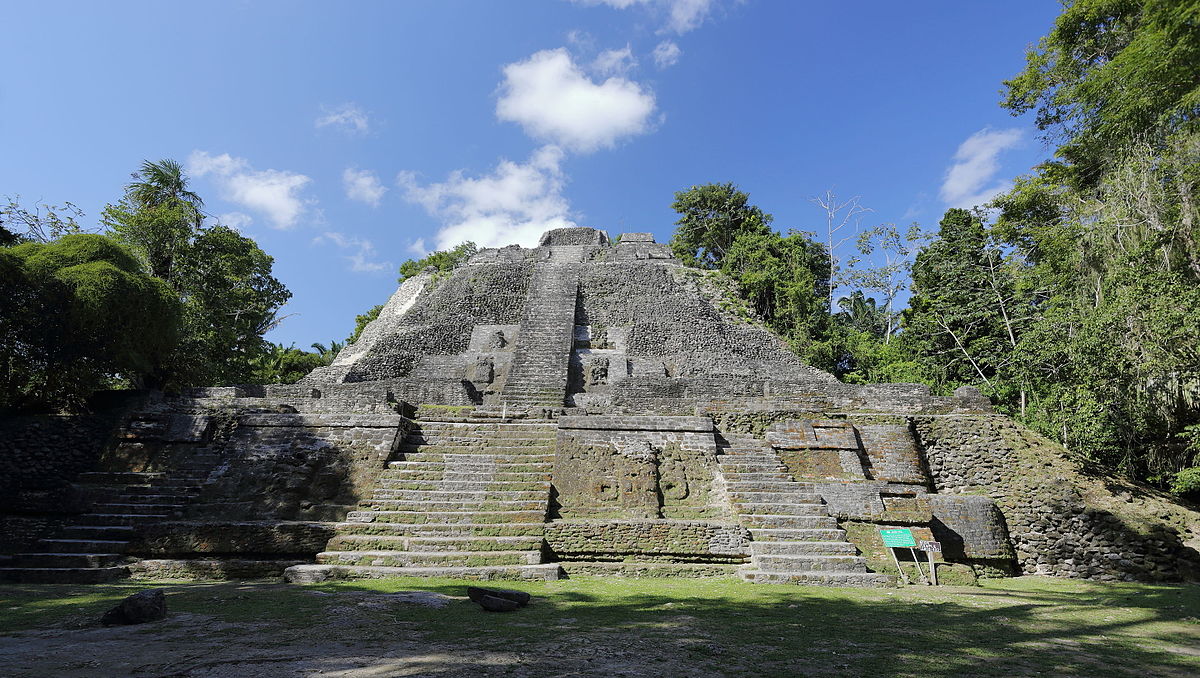 David is the rep​ we had​ and he is associated with Ocean Tides Beach Resort​​. In fact I think he shows up when you check in there and buys you a free drink and sells you tours. Also rents golf carts.​ I think we will get a golf cart, because I like going all over the place, but we’re close enough to town to walk to a bunch of places.
There is a Mayan ruin site on the island, but its mostly shards of pottery and such, I haven’t been there, so I’m not sure if its work the trip. It’s a long golf cart ride.

Read, write, hang out on the deck, walk the beach, get a massage (a lot of on the beach massage folks), could rent a catamaran or kayak. There’s shops and souvenir places to wander around downtown. There night club disco type places , but I didn’t go to any. There is one place called secret beach (not really secret anymore) that is one of the few good swimming beaches. You need a golf cart to get to it.I’m thinking of going to Caye Cauker for a day. They say it’s just like Ambergris but slower. The Estuary looks interesting. Some say its worth going and others say, its the same as Ambergris so why go. I’d like to see for myself and its a cheap ferry ride. 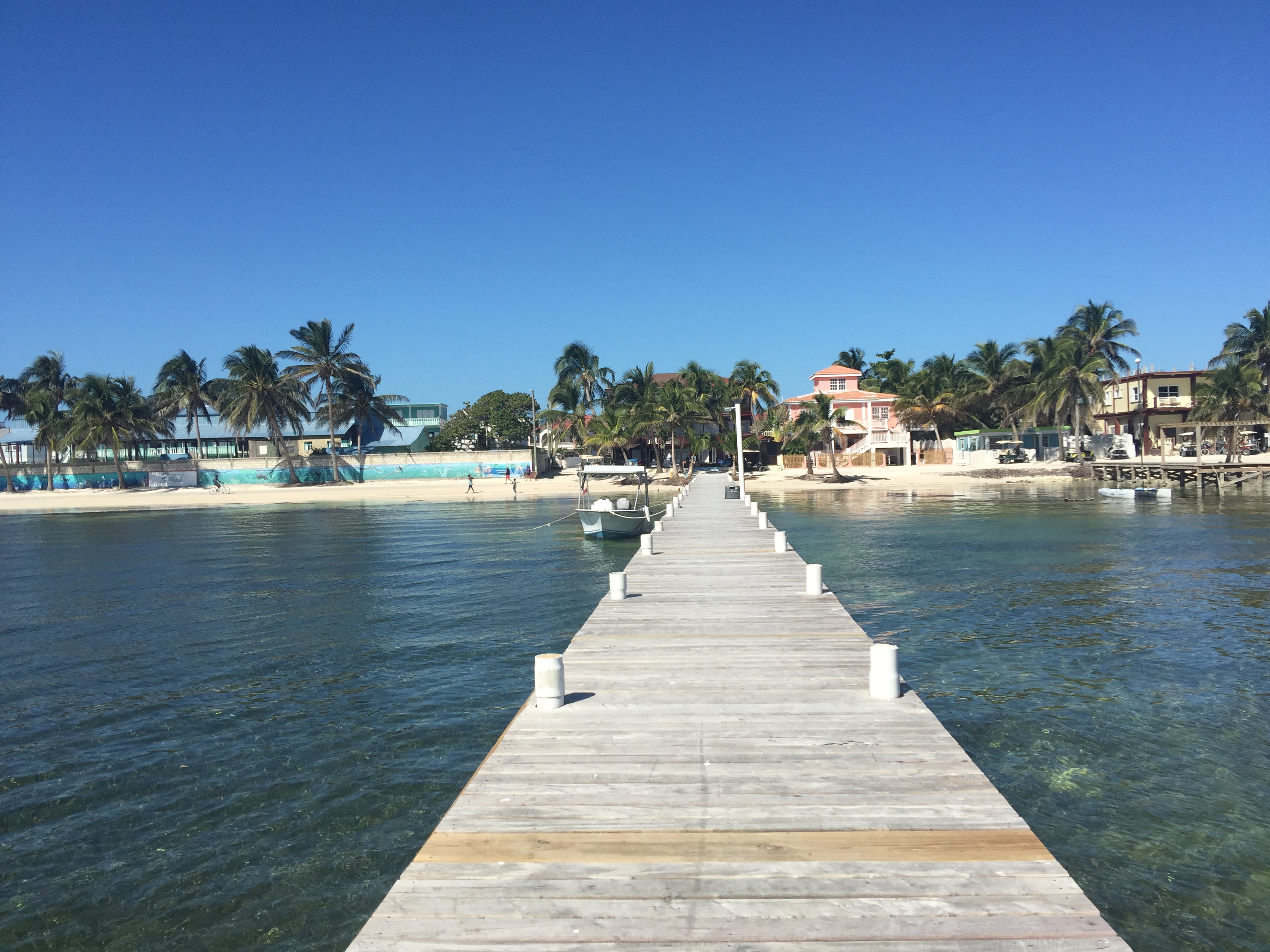 Looking Back at Oceans Tide Beach Resort from the Pier

I really like wandering around, going to different bars and meeting people or just hanging out and watching the world. One morning an eagle ray swam right under me on this deck in front of the hotel.

Fido’s – Big fancy place where JJW shows are in January. The group had a open mic type thing after the JJW shows here as well. Nice stage and they have a regular rock n roll house band (good food, pretty good hike, don’t think they have a pier anymore) 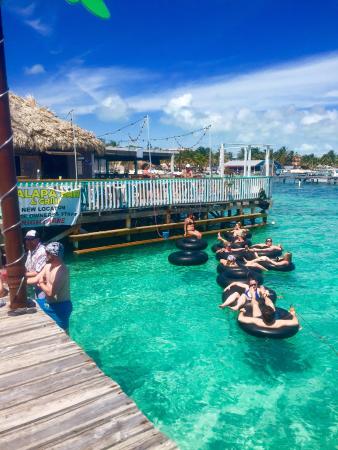 Floating at the Palapa Bar

Lazy Pelican – bar on the deck of Oceans Tide – Raymond is a great bartender
Sandy Toes Beach Bar & Grill – Bar food, music sometimes
Melt
Palapa Bar – pretty good cheeseburgers, this has the tubes you can float in and drink beer in the Caribbean sea
​North of the Bridge, probably need golf cart or taxi​
Dive Bar – Dive shop and bar with swing over the water , good sea food (I played some music during Brent’s set here last year.)
Paco’s Tiki Bar – way out, seemed kind of secluded, in a good way
Truck Stop (has a deck out over the lagoon)- pizza is good here, other stuff it’s like a food court made of shipping containers, it has an outdoor movie night, and a mural that says Welcome to Belize” where you can take a picture.

Places I haven’t been , but looks interesting

Black and White Cultural Center – apparently its a restaurant with a bit of a show.
Elvi’s Kitchen – famous local restaurant Mayan Fest Buffet on Friday (some reviewers says the buffet very over priced US$40). Reservations may be required
Pupuseria Salvadoreno – I’ve had Pupusa that a friend of my sister’s made, and they were pretty good , I’d like to try them in the region.
Latitudes Cafe – Grabbed a beer here during a long walk, but did not eat. Very friendly American owner. I think he is either a Doctor or Lawyer who gave it up to move to Belize 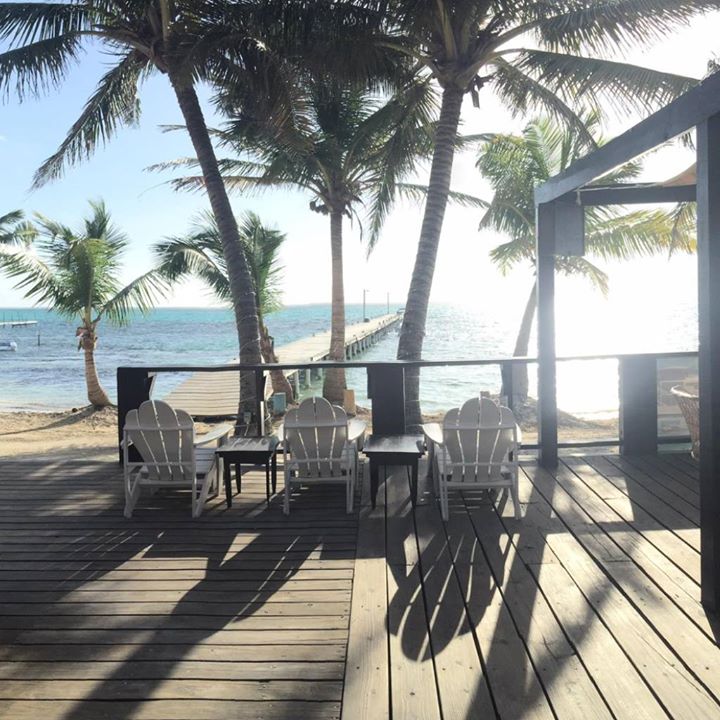